Now we’re back to complicated. Let’s start, as normal, with the equation:

In the list above, the first item encompasses a completely separate law, called Lenz’s Law, so we’ll dive into that before we get to a real life example of Faraday’s Law.

An experiment with a tube

Watch this awesome video and then we’ll break down what is going on. You don’t have to watch all of it, it’s just good to have a visual of what I’m going to explain. And he has a delightful accent. 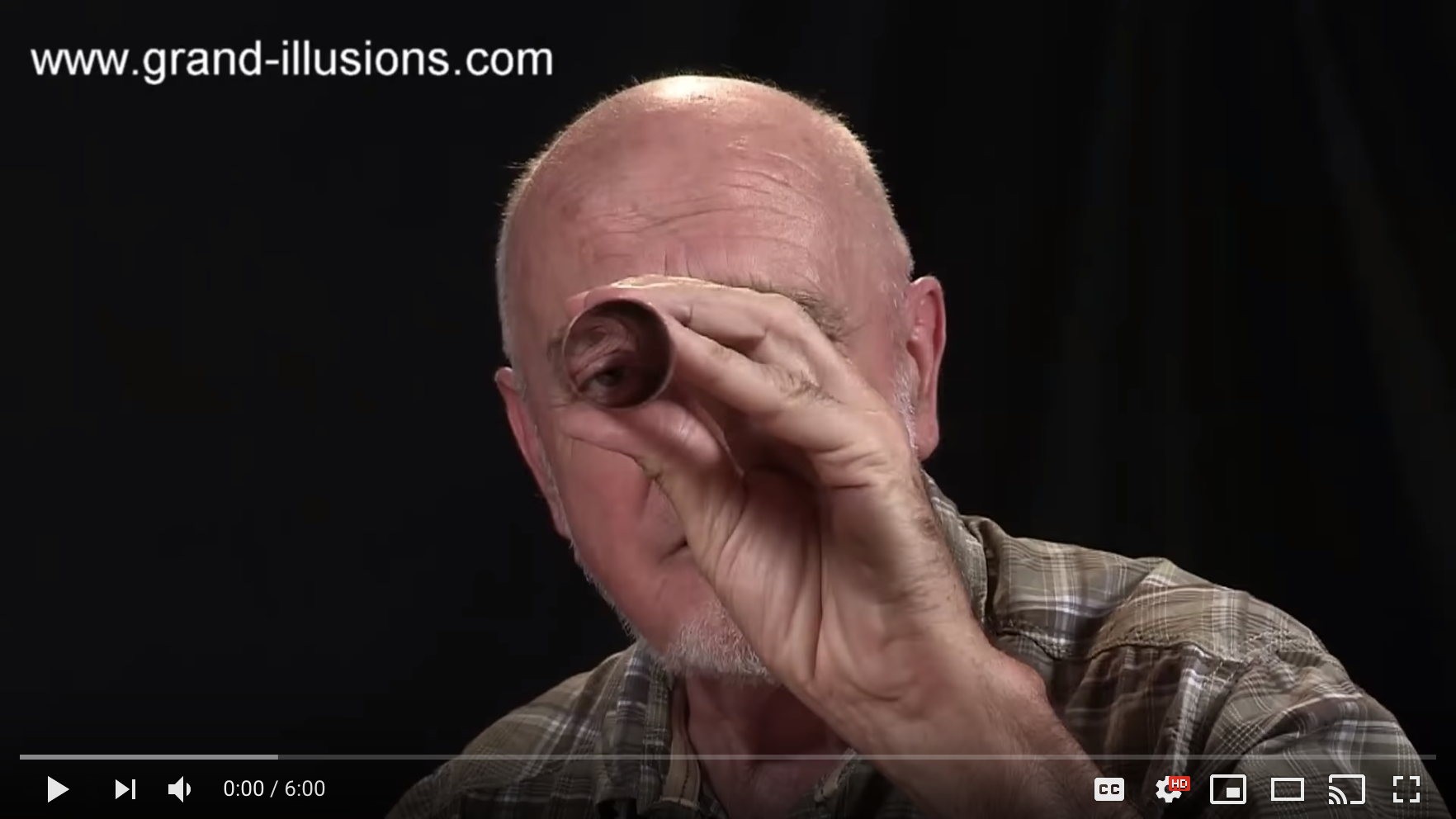 This is where Lenz’s Law comes in.

Let’s use the example in the video with a conducting tube and a ball magnet.

A conducting tube is a tube made of metal like aluminum or some other conducting material. If the tube were made of rubber, the magnet would just fall through the tube normally. 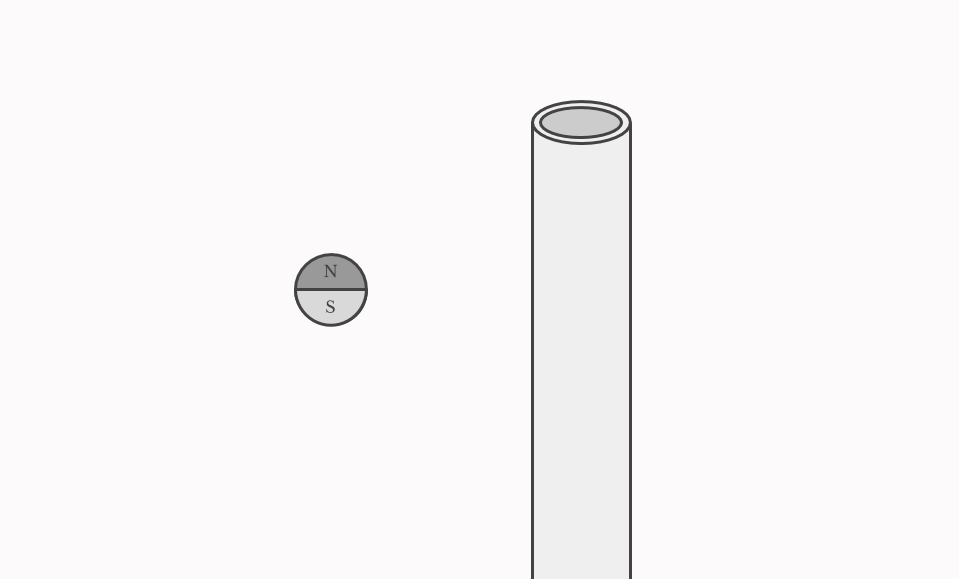 We drop the magnet into the tube. The magnet has a magnetic field, as we know.

Quick side note: I’m drawing lines like this for illustration purposes only. Those lines do not exist in real life, they just help me show you what is happening. The exact lines don’t matter either, what matters is the direction. 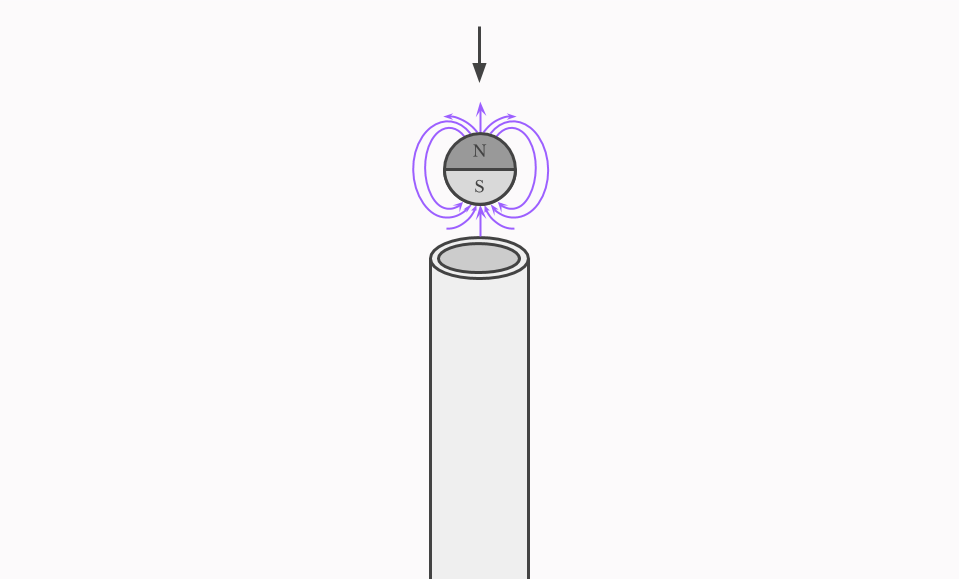 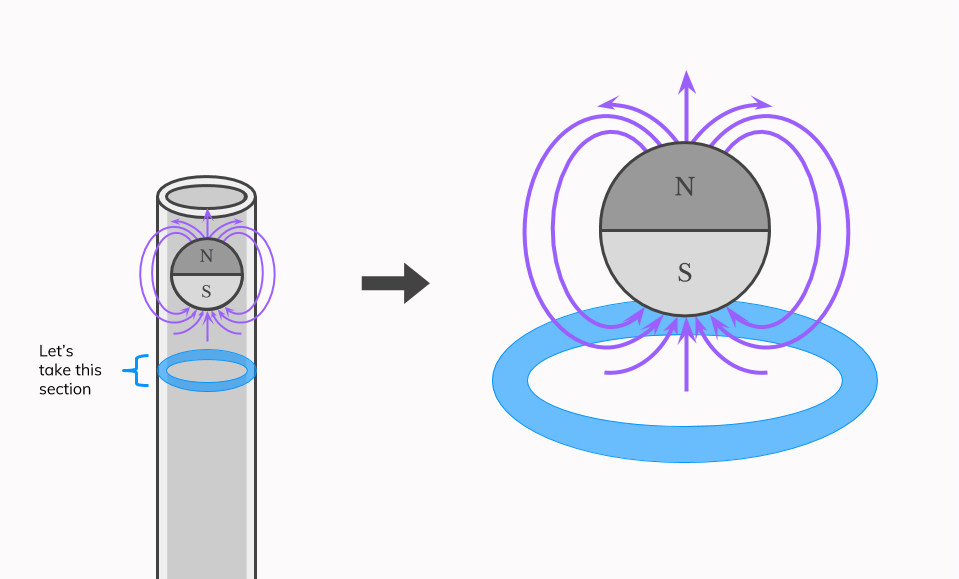 At this point in time the magnet has not yet passed this slice of the tube. We’ll call that time t1​, for simplicity. The magnet will fall past this slice at some time t2​. The two moments will have very different levels of magnetic flux. In other words, t1​ has very little of the magnet’s magnetic field traveling through it, while t has a lot more. This is considered a change in magnetic flux over time (dtdϕB​​). 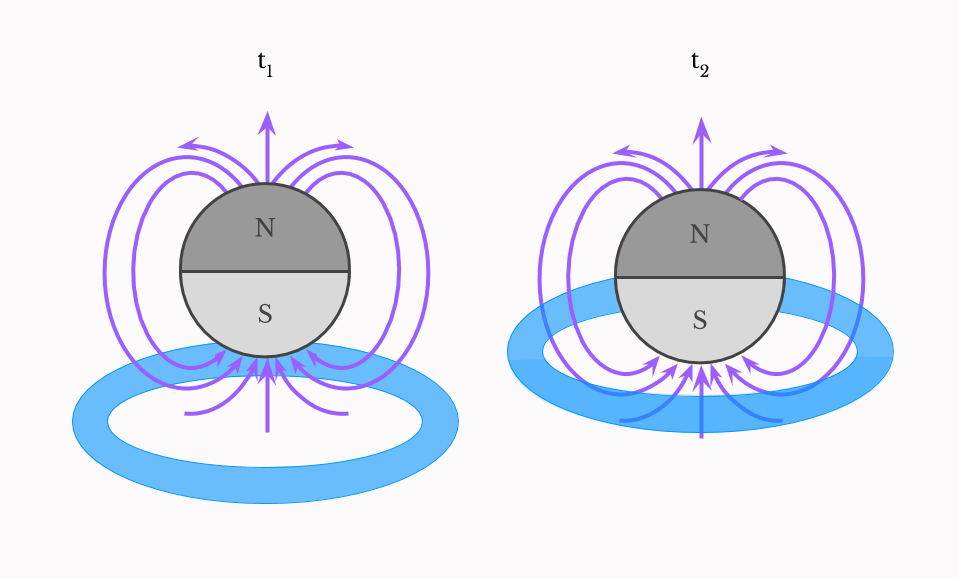 Two things to keep in mind: 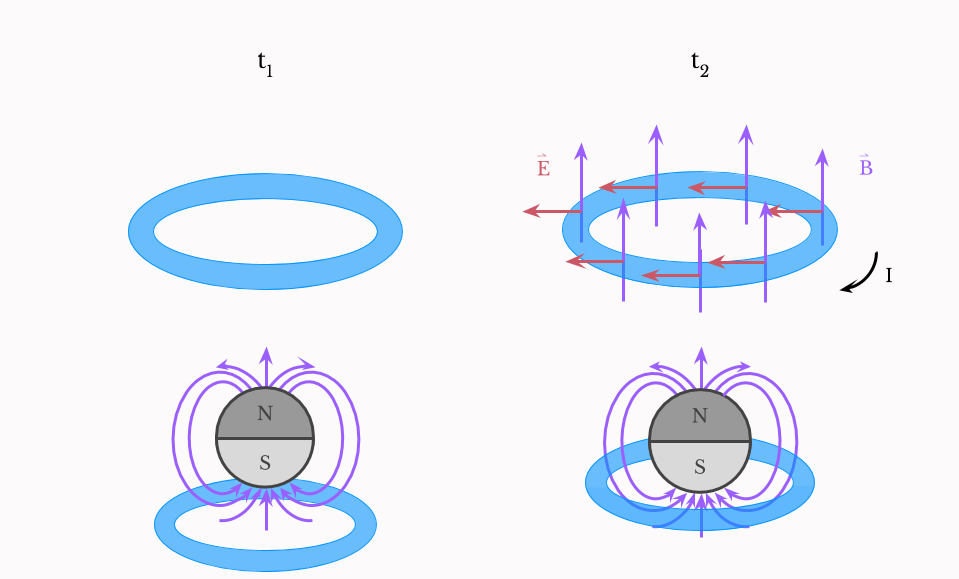 Lenz’s Law comes into play for the induced magnetic field. This magnetic field must oppose the induced current. It is what the negative sign means in the equation. Without using any math, we can deduce the direction of the induced electric field by using our right hands: 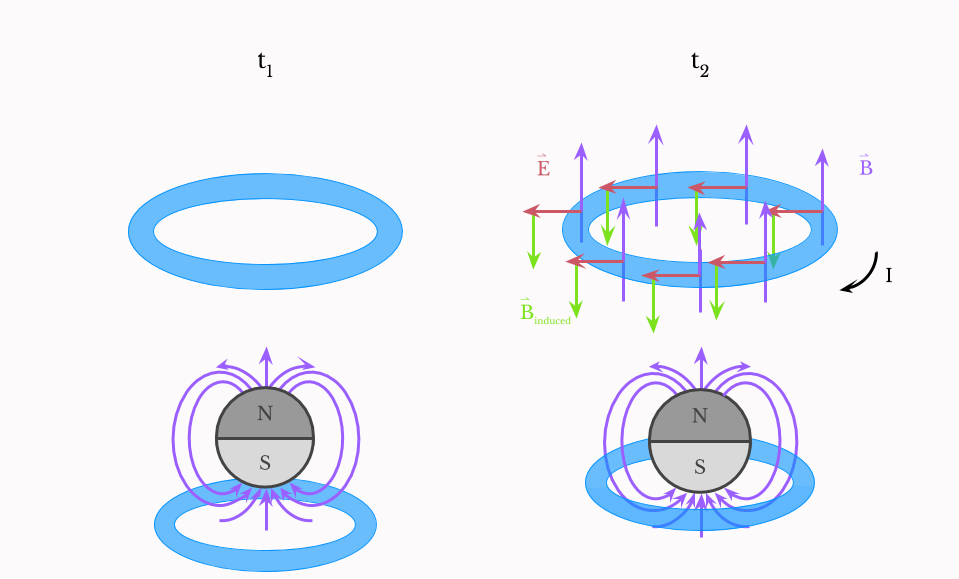 The magnet still succumbs to gravity, however, and the magnetic flux will change again. 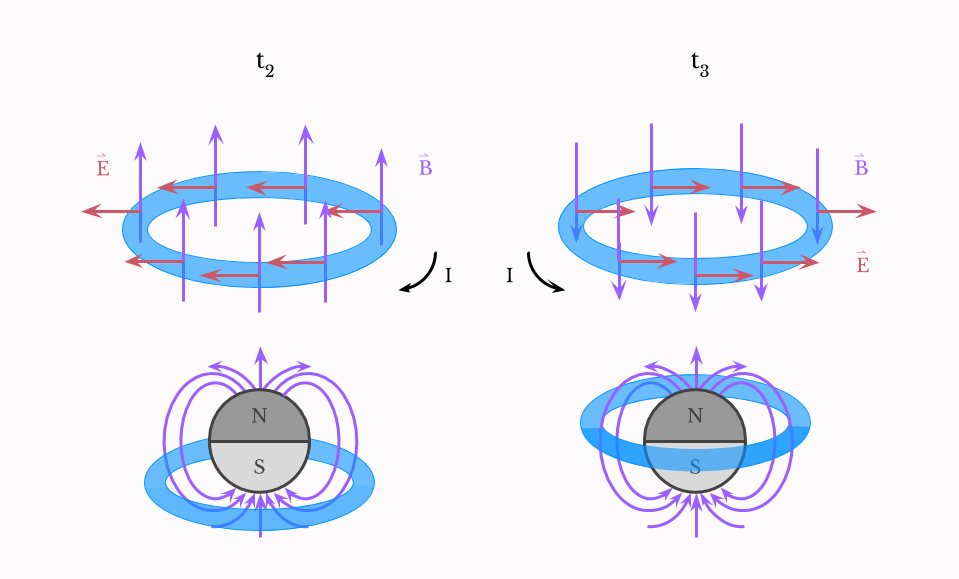 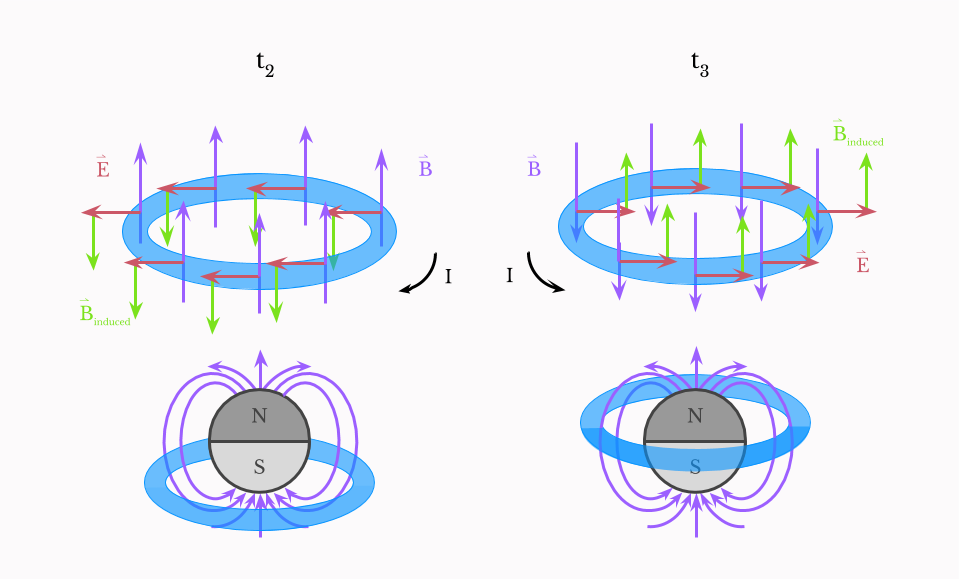 Faraday’s Law in the real world

So how is this phenomenon useful outside of dropping magnets into conducting tubes?

This is the law of electromagnetic induction, which means we can use magnetic fields to generate currents, which is exactly what an electric generator does.

Inside generators are coils of a conducting material that either spin or engage in some sort of motion near a magnet. The change in magnetic flux in the coil induces a current, which we can channel to power devices and tools.