There’s a few questions we need to answer first in order to understand the value of this equation:

What is electric flux density?

Say we had a mix of charges around each other. 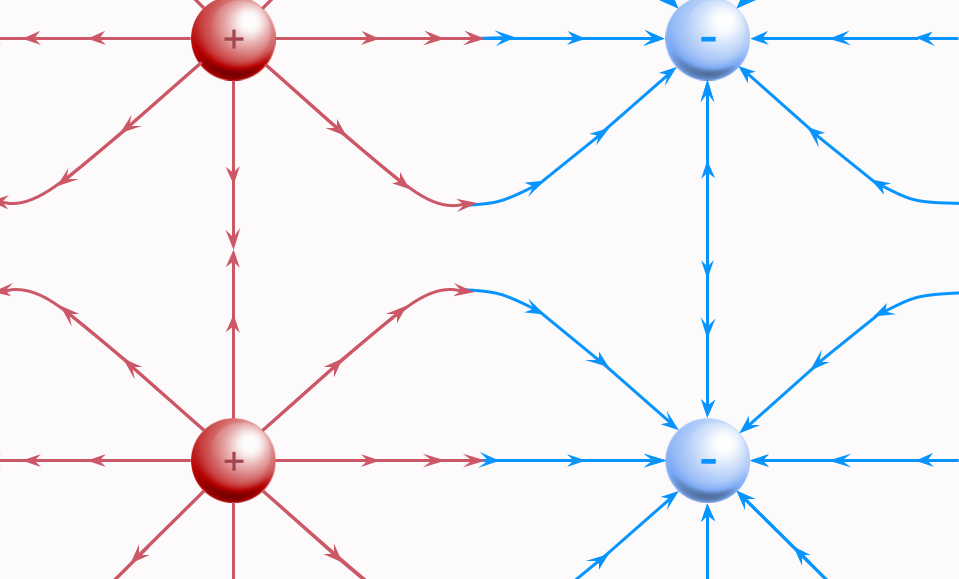 If we drew a line between these charges and counted how many electric lines crossed the dotted line, we’d get electric flux density. Intuitively, we can get that by knowing its units: Coulombs per meter squared (C/m2).

How do we count charge?

From a high level, Gauss’ Law tells us that regardless of the surface or volume that you enclose charges in, you can get the enclosed charge. So I can wrap some charges in a sphere or a cube or a cylinder and still get the same charge for each.

Let me illustrate with a contrived example.

Say I have some charges that are either positive or negative and randomly spread out. 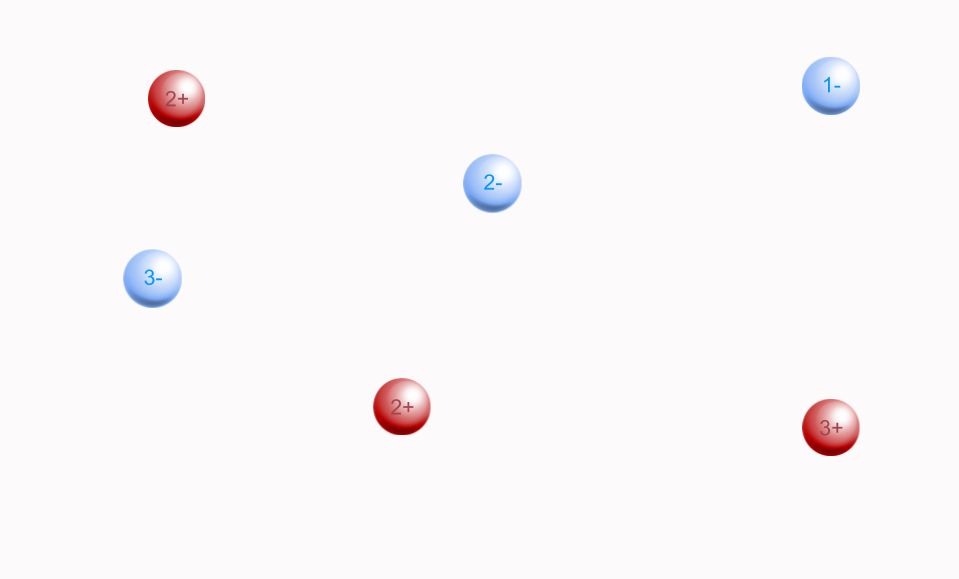 I want to draw a line for every unit of charge. So a 3+ charge will have three lines “pushing” out of it. The lines have to either connect to other charges (purple) or shoot off into infinity (red or blue). 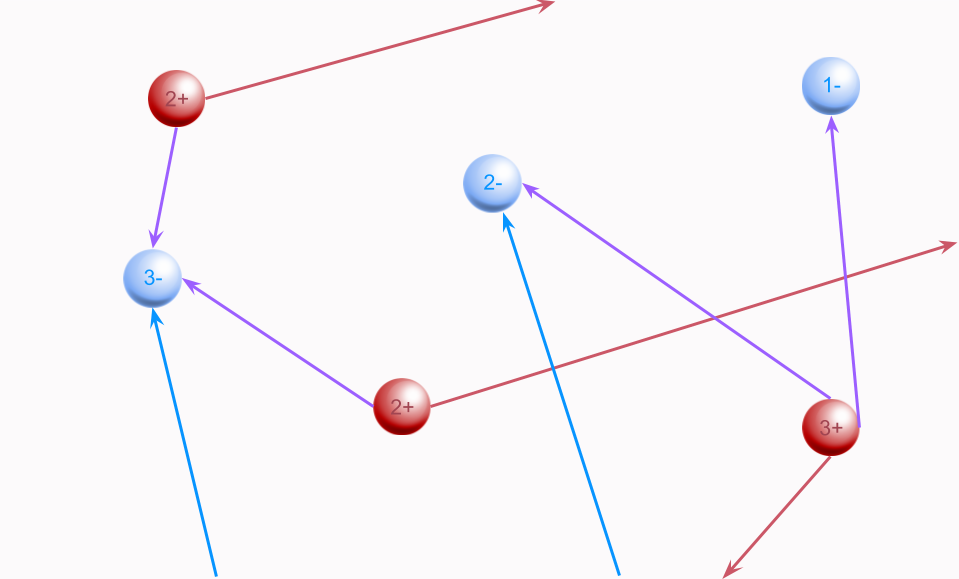 Now, if I draw a random shape anywhere on this, I can count how many lines enter and leave the shape. If a line enters and leaves the shape it counts as a positive and if a line enters but does not leave the shape it counts as a negative. Finally, the lines that connect charges are a single line since they “pair off” and will interact with one another to create an electrical force. 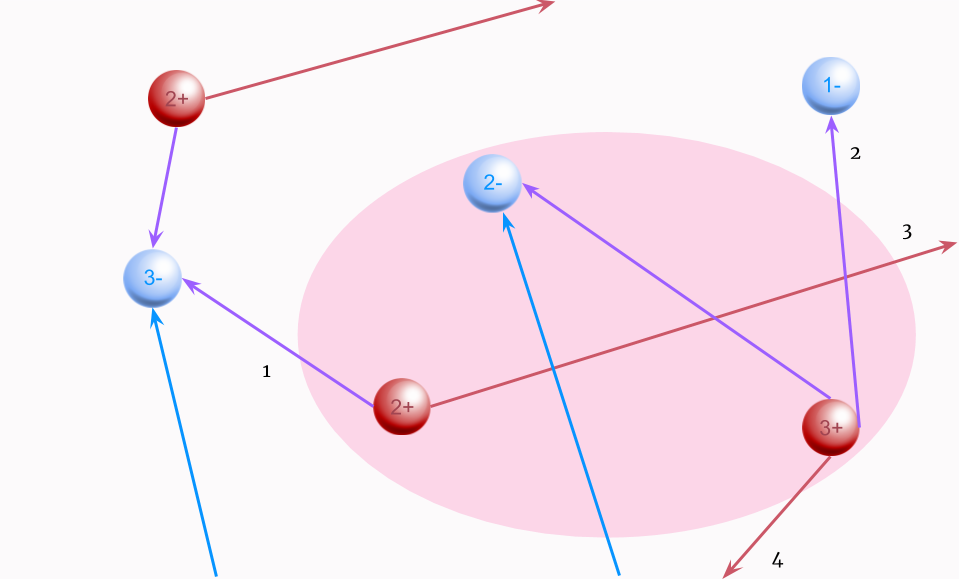 And the lines that enter but do not leave the shape. 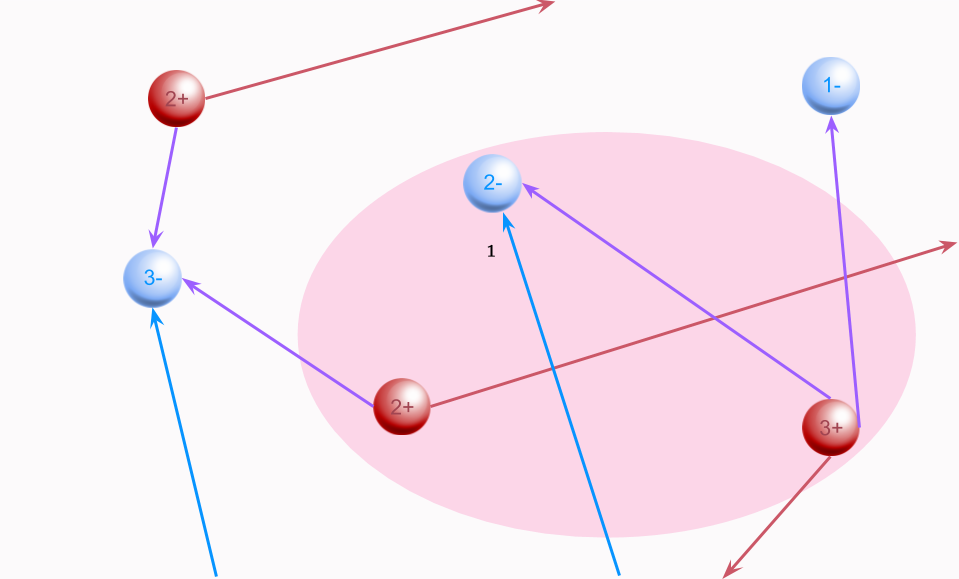 In this case, we have four lines that enter and leave the shape and one line that enters but remains in the shape. So +4−1=+3. And look at the net charge encompassed by the shape. It’s +3!

Gauss’ Law is trying to communicate this same idea, albeit in a much less contrived way. In it’s most basic sense, how the electric flux behaves across a shape dictates the amount of charge within a shape.

What is the Divergence Theorem?

When we’re applying the Divergence Theorem to an electric field, or any vector field, we try to identify the sources and sinks in the field.

A source is a location in the field that vectors seemingly appear out of. We’ve already discussed something that acts as a source that “pushes” out from itself. Therefore, any sources we see in the field tell us that there’s a net positive charge at that location.

An example of a source looks like the origin of this graph. 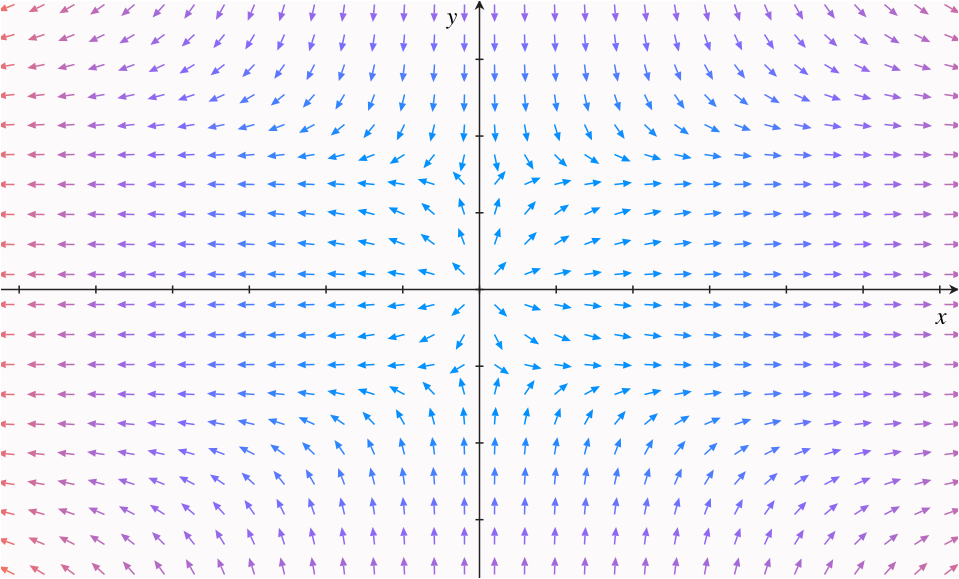 A sink on the other hand, is the opposite. Locations of sinks tell us where there are net negative charges in the field.

An example of a sink looks like the origin of this graph. 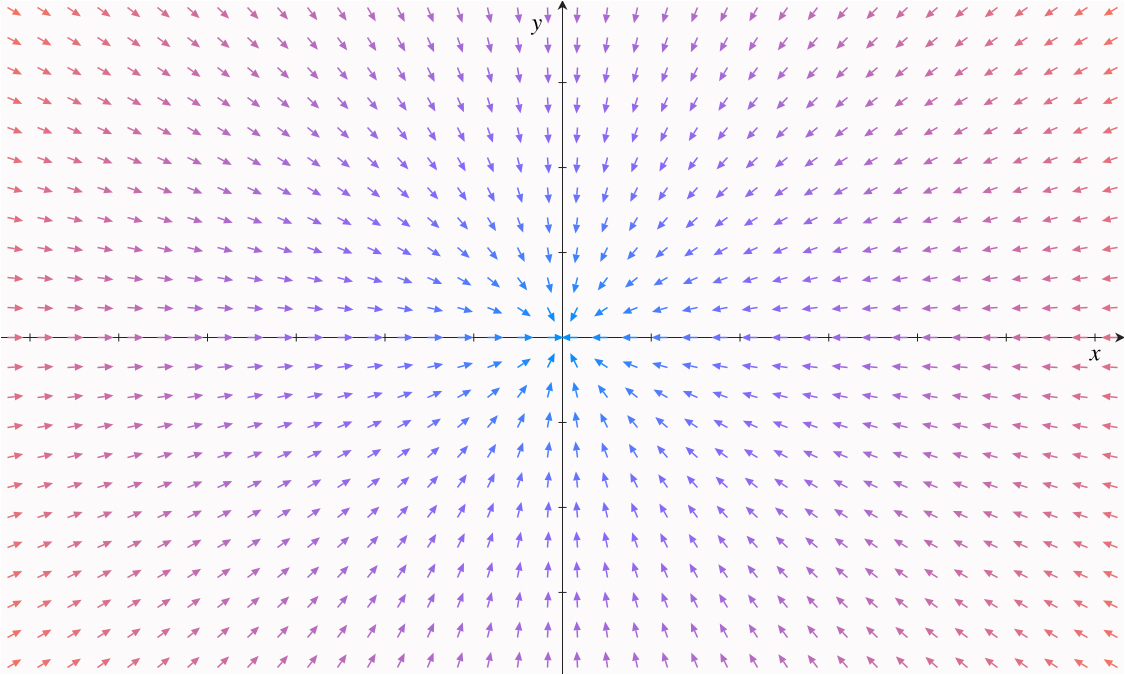 One thing to keep in mind

It’s important to note that both of these vector fields might be snapshots of moments in time for their respective fields. You’ll find gifs on the internet of vector fields in motion like this:

(This gif isn’t mine and can be found here)

If we had a positive charge enclosed in a cube it would look something like this, 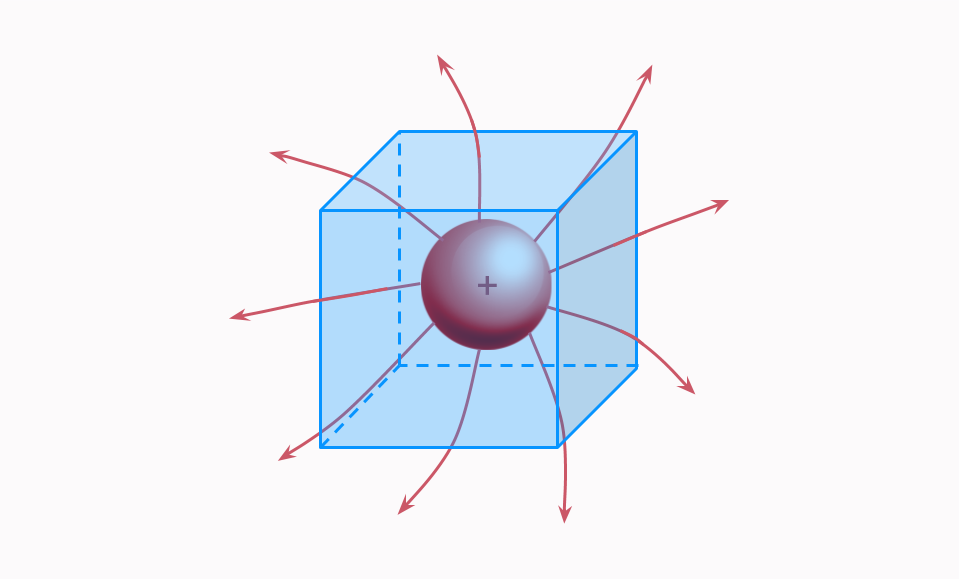 where the positive charge creates an electric field that “pushes” out from itself.

We are using a cube which acts as our closed, Gaussian surface. Remember, the charge doesn’t have to actually be inside something solid and tangible; the cube doesn’t have to exist in real life. Instead its shape and size are completely arbitrary. What matters is that the charge is completely enclosed within the surface.

Now we have this positive charge enclosed in the cube, which is exuding an electric field. Since it’s positive, it will have a general outward flow of the electric field. If it were negative, the flow would be inward, towards the center of the cube.

Going back to the equation: the left side, ∮E⋅dA, describes the total amount of electric flux that is flowing out or into the surface and is normal to said surface. So if we took one of the electric lines, we’d try to get dA or the components of E that are normal the surface it crosses. 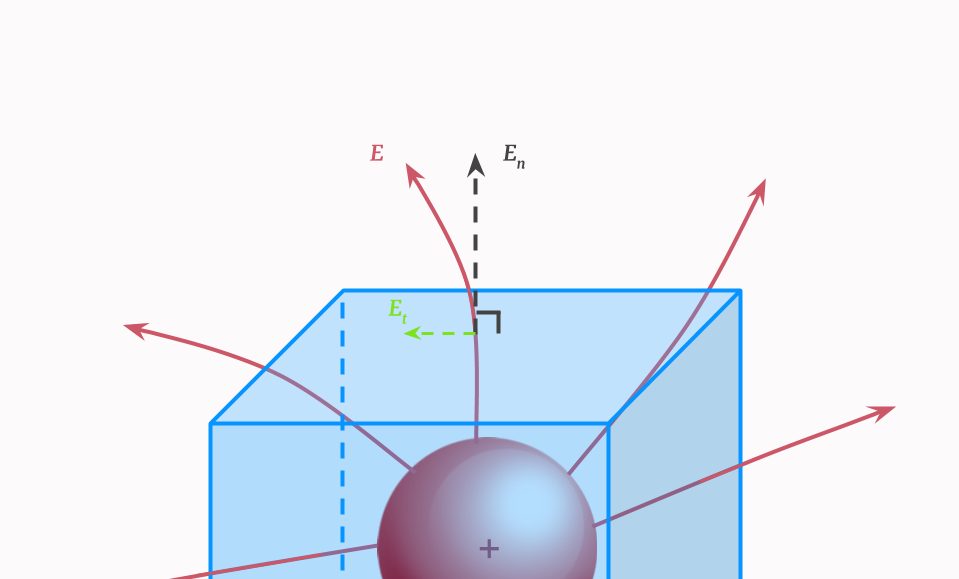 To get all of the lines that are passing through the surface we would need to find the surface area of the enclosing shape and multiply by E’s magnitude.

The right side of the equation involves finding the volume of the enclosing shape and using what we understand about how the charge might be distributed. Charge could be constantly distributed or based on a function, but the key factor is that the charge is distributed symettrically. Otherwise, using Gauss’ Law would be painful.

How do we apply this equation?

Now for a real example where we’ll crunch some math. Let’s say we have a distribution of charges within a sphere centered at the origin that follows ρ(r)=ρ0​/r2 and we want to find the charge enclosed in a sphere of radius r. 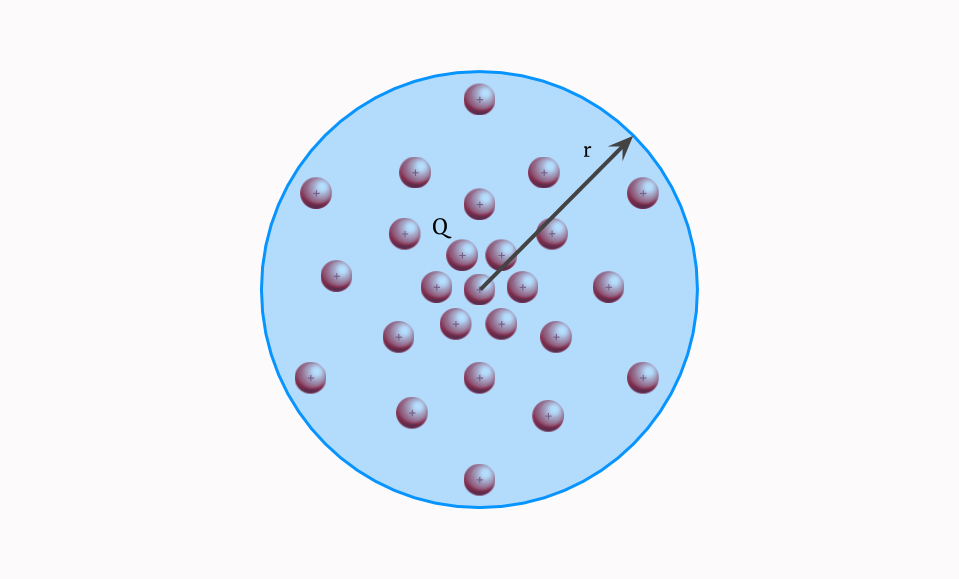 We’re going to use spherical coordinates (r, Θ, Φ) since we have a sphere. But now we have all these variables — ρ, Qenc​, r — and we need figure out how they relate within Gauss Law.

can be rewritten as

because any vector normal to the the surface of the sphere is the r^ unit vector, which also corresponds to the component of E that we care about.

Since En​ lines up with r^, this big jumble of letters —r2sinΘdΦdΘr^— won’t matter.

We want all of the components of E that are normal to the sphere (all the En​ as illustrated in the previous section). E’s magnitude doesn’t rely on Φ or Θ; the angle of E doesn’t change how strong or weak E is. The only thing that affects E is r. Therefore, since E is a function of r, we’ll represent it like this: En​(r). 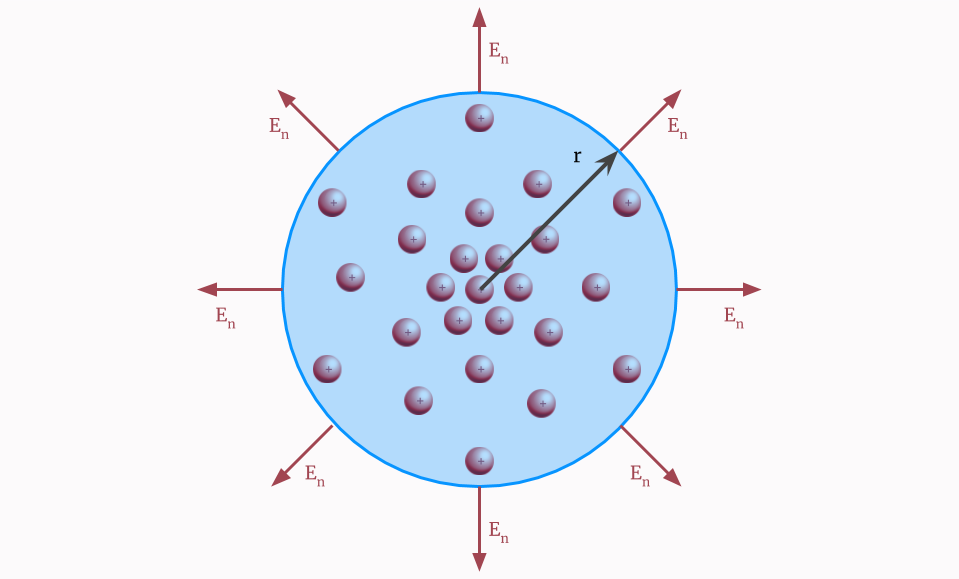 (Pretend this is a sphere with lines shooting out of it)

This means we need to get the surface area of the sphere, which is 4πr2, and multiply it by En​(r):

Now for the right side of the equation. We want to get Qenc​ which is the charge inside of the sphere, a volume. Since we know the distribution of charge we can integrate over the sphere using our spherical coordinates:

Now we can solve.

Since ρ0​ and ε0​ are constants, En​(r) is inversely proportional to r. This makes sense since the further we go away from the origin and the center of the sphere the less charge there will be and, therefore, the less electric flux.

Why is it important?

In a nutshell, Gauss Law tells us:

Engineers and scientists can use this law to determine the electric field for any symmetrical distribution of charges, so the contrived example where we counted charge from above would be difficult to calculate. Rather, examples that have cylindrical, spherical, or planar charge distributions such as capacitors or copper wires would be more appropriate applications of this equation.