I’m taking a break from Maxwell’s Equations to talk about something else I’ve done recently: learned Rust. I’m mostly taking a break because it takes me like 7 years to create all the diagrams for those posts.

But anyhoo, what is Rust?

According to Wikipedia, Rust “is a multi-paradigm systems programming language focused on safety, especially safe concurrency”.

At first, that meant nothing to me since my only frame of reference was Ruby, Javascript, and — unfortunately — PHP, but as I slowly learned the language using “The Book”, the pieces started to fall into place. Let’s talk about them.

“Systems” is a term reserved for things like operating systems, kernels, compilers, game engines, drivers, and other “platforms” that we can run other programs on. Systems interact directly with hardware, and in the context of computers, rely on the OS to facilitate the manipulation of hardware.

Rust is just another language, like C and C++, that we can use to program the things that interact with your hardware. There’s even a kernel written in Rust called Redox.

So then what are the qualifiers for a language to program something like an operating system?

If we defined a systems programming language as a language that we use to interact directly with hardware, then only assembly languages would count because the programmers at the time had only themselves and a dumb box of hardware.

Every language from there would just be abstractions away from the hardware. 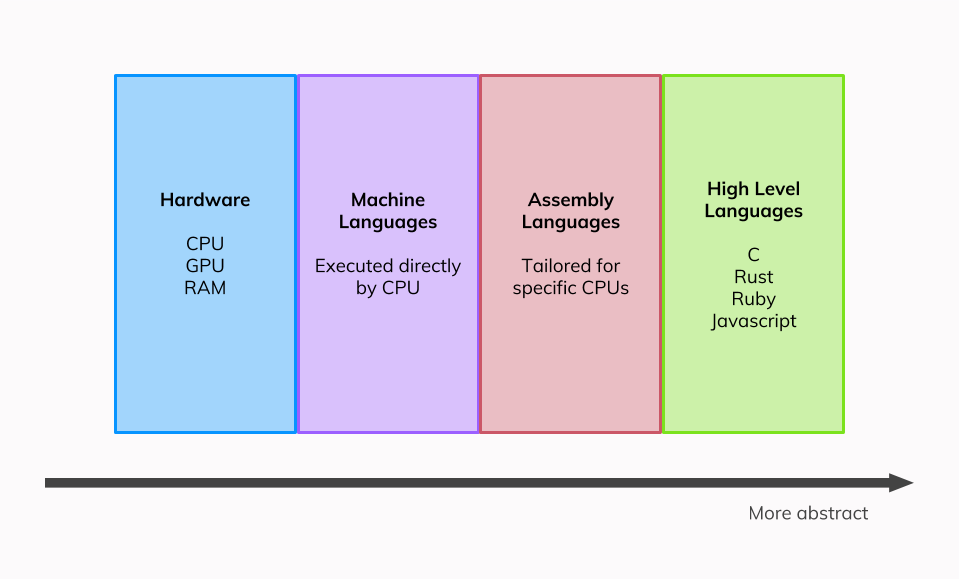 On the far left we have hardware, which is ultimately what our programs operate on. Then there’s machine language, binaries that the hardware can understand and run. All programs eventually compile down to machine language. If we go up a layer in abstraction, we get to assembly languages, which are the first human readable programming languages tailored specifically to their respective types of hardware. Each line in an assembly program represents an actual operation that the computer does (and a massive amount of machine language). Rust, C, and Javascript are another abstraction up. They represent the high-level languages, where the code is even more undertstandable than assembly and represents an even more massive amount of binary.

Naturally, as we get more and more abstract, we have to rely on more under the hood, which decreases speed and performance. 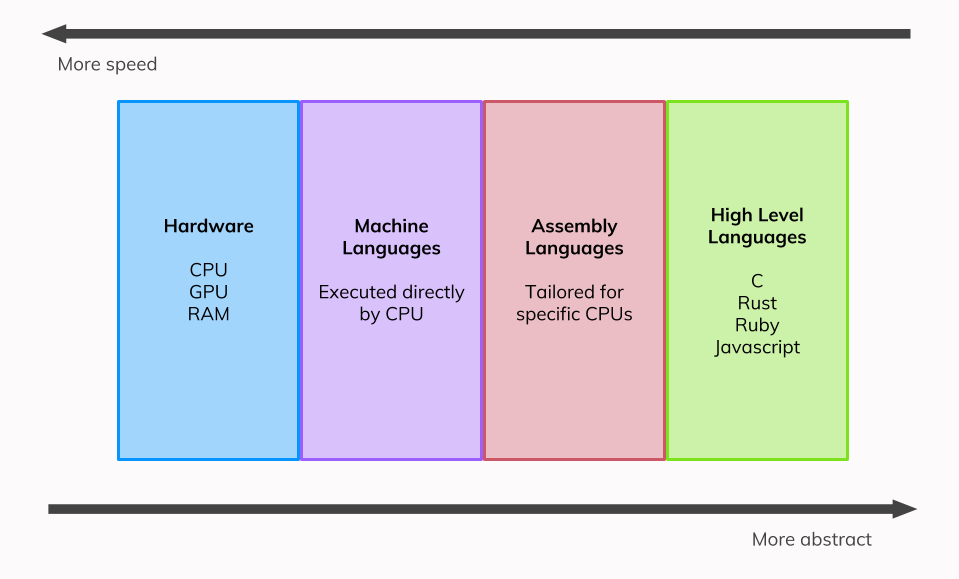 Rust is both fast and directly compiled to binary, making it a systems programming language.

Rust’s compiler is a stickler for memory safe code. Let’s take a look at an example.

We have a main() function that is the entrypoint for every Rust program, like the main method in Java or C. At compile time, the compiler throws an error because we’re trying to access an out of bounds index. C or C++ would just try to give you whatever the corresponding value was at that place in memory even if the value didn’t belong to the vector.

Let’s continue with the same basic example above.

In the context of passing arguments to functions, we’ll see Ownership where it’s most valuable. Let’s say I had my main() function that calls another function named print_first_value()

When a variable is passed to a function, the function takes ownership of the variable. In this case, v would be owned by print_first_value() and made available in print_first_value()’s scope. This code wouldn’t compile because I’m trying to use v in the main() function’s scope.

We could rewrite it this way:

There’s definitely more to Ownership, but even in this small example, we can see how it helps keeps your code honest; your functions can change what they own without worrying about weird side effects.

However, there may be moments when you may want to perform several operations on the same value or collection. If each function takes ownership of your value, then how can you chain operations on it? This is where Borrowing comes in.

If I wanted to perform several operations on v then I would let my functions borrow the value in v.

Using the & operator, I can pass a reference to v into print_first_value() and print_size(). Since both functions are borrowing the value of v, they don’t take ownership, and I’m free to continue using v in the main() function.

If we excluded the & in the arguments for both functions, the compiler would throw an error. Borrowing is baked into the compiler just like Ownership, and when used in tandem, they give you more granular control of the memory in your program.

Concurrency in Rust is safe thanks to Ownership and Borrowing. Before I get into why, I want to dive a little into what concurrency means.

Sometimes you may want to split out the functionality of your code into multiple threads. Threads are independent tasks that run concurrently in a process. A process is what runs your code in the first place.

For example, you may want to write a super fast multi-threaded server. Each connection between a client and your server would live on a separate thread, while your server runs on a single process. If threads didn’t exist in this example, the connections would occur sequentially, which would impact performance.

The compiler’s Ownership and Borrowing rules are also applied in your multi-threaded code and they prevent you from using variables that one thread has ownership of and the others do not.

There were two reasons why I was drawn to Rust: (1) it’s compilable to WebAssembly and (2) it’s the new hotness. (I’m not ashamed to admit #2). I’ve wanted to mess around with WASM for a while so I’ve started a very small project called Synesthete.

Like the name suggests it’s about synesthesia, particularly seeing colors when visualizing numbers. Still need to design it, but the general idea is you’d map all digits (0-9) to a color, type out a bunch of random numbers, and see what it looks like with the palette you chose.

This is probably not the use case for WASM but no one can stop me.